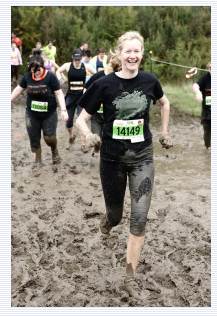 So you know those mud run/obstacle course events that are getting popular lately, like Tough Mudder? Well, I did a 5K one called The Stampede. And it was so fun! You enter as a team, and no one is timed, and the start times are staggered, to prevent huge back-ups at the obstacles- so you can be as relaxed or as intense as you desire. Since I was getting over a bad cold and my housemate has an injured back, our team (the Fudder Muckers) was definitely on the more relaxed side of the spectrum- although we did manage to complete all obstacles.  The first couple we designed to get you good and dirty- running through deep, thick mud and then wading across a muddy stream.  Most of the obstacles were fairly easy and involved climbing over things, but a couple were downright mean.  For one, you had a climb up a ladder into a large shipping container that was filled with ice water, wade across, and climb out the other side.  My legs were stinging, but judged by the shouts of "ow my nads!" I think the men suffered more on this one.  Some of the obstacles were super fun- a giant slip and slide down a hillside, and a section where you had to climb over abandon cars- it felt like a scene from a zombie movie.  For me and my spaghetti arms, the most difficult part was climbing over those wooden walls you always see in the boot camp scenes of military movies- luckily since it was a team effort I got a boost to help me reach the top.  The most evil obstacle was right near the finish...a trellis of wires, some of which electrified at 10,000 volts, over a mud pit- so the option was either to slither on your belly like a salamder underneath the wires, or just power through and get zapped- although nearly everyone who went for the run ended up falling into the mud anyways. I went for the slither but a wire brushed my back and I did get shocked, and it fucking hurt! I then burrowed so far down in the mud that it would be impossible to get grazed again. 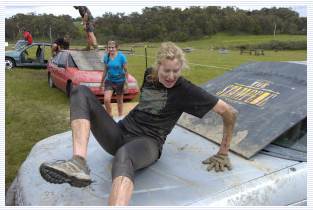 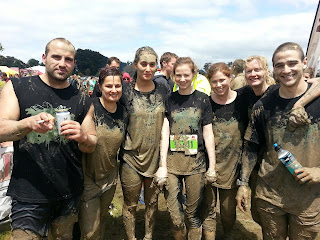 Overall, it was a great day and I would definitely be up for another one- although not sure I could handle the full 20K version.
Posted by eileen at 5:52 AM

I love how happy you are in the first photo. Awesome!

You certainly are an exponent of living energetically