So I was getting bored with my hair and decided to go for a change. I wasn't daring enough to try a short cut so I went for highlights and bangs.  Yes, bangs (or fringe as they are called here).  They are a pretty big risk, as but hey, why not get a haircut that I'll spend the next two years growing out?  Mostly, I was hoping the end result would be more Marianne Faithfull and less mulletted Eileen, age 11.  The result, probably a bit more towards the latter but at least I'm not bored with my hair anymore! 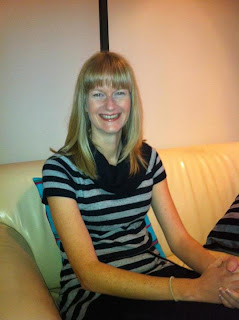 * For those of who didn't immediately pick up on the Ricky Martin reference, you disappoint me.
Posted by eileen at 8:47 AM 4 comments: 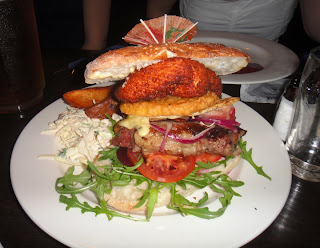 So "bogan" is slang for Australian redneck, and one of the pubs in my neighborhood (the Napier Hotel) offers a hamburger that lives up to its name: Bogan Burger.  The bogan burger contains steak, a chicken patty, fried egg, bacon, potato cake (think McDonald's hash brown), beets*, lettuce, tomato, onions, cheese, mayo and pineapple.  Oh, and it comes with potato wedges and cole slaw on the side.  Naturally, I had to try it.  I opted to split it with my friend Nicole, because there's no way I was going to attempt to eat this thing by myself.  It's impossible to pick up, so I ended up eating the chicken and the steak with a knife and fork and did the rest sandwich style. Other than the steak, which was a bit tough, it was actually pretty tasty, especially the hash brown.  Although I don't think I'll ever order it again, unless I take up competitive eating as a hobby.


* Australians call beets "beetroot" and put them on everything. This fondness for beets is much, much weirder than marsupials or driving on the left.
Posted by eileen at 10:53 PM 1 comment: