The fantastic mating dance of the Australian peacock spider. If I were a lady spider, I'd totally go back to his web. (via Metafilter)

Peep dioramas- the winner was a Peep reenactment of the Chilean miner rescue.

What I've been up to: 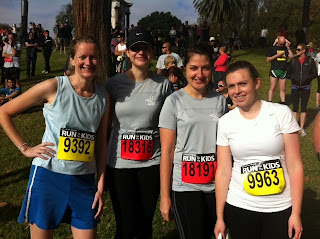 Running a bizarre distance (14.38K, or 8.9 miles for you metric haters) to raise money for the Royal Children's Hospital.

Checking out the King Tut exhibit at the Melbourne Museum.

Right now I'm waiting for my friends Yuki and Jon's delayed flight to get in. Yay for visitors!
Hilariously, when I checked their reservation for the flight number, I discovered that they had booked themselves with the titles Master and Reverend. They'll be in Melbourne until Friday, and then the three of us fly to Queenstown, New Zealand for a week on the south island. Woohoo!
Posted by eileen at 7:29 AM 2 comments:

No Reservations in Southie (as if you'd need them)

So, this morning I checked my email and three people had informed me that traveling food reviewer Anthony Bourdain had done a show in Boston- thanks, guys! Boston.com posted details and photos here. Props to him (people still say that, you know) for including The Quencher and the South Boston Bowlarama on the itinerary. If you like beer and bars and haven't been to The Quencher yet, you should consider yourself incomplete.
However, I have one major criticism:

"Bourdain and Ruffino made the first stop on a pub crawl through Southie at Murphy's Law."

Wait, wait, wait...everyone knows that Murphy's Law is the LAST stop on a pub crawl, not the first! And here is when I tell you a little anecdote that epitomizes Murphy's Law:

Several years ago, my roommate Maria and I attended a beer festival at the Harpoon Brewery with our Irish neighbor Peader. Anyone who's been to a Harpoon festival knows that they're essentially a recipe for intoxication. Seriously, it's as if they serve blackout juice. When the doors closed, we decided to walk back to our apartment and stopped in at The Law for a couple of late-night drinks. Peader ordered a flaming Sambuca, as you do. He knocked it over and next thing you know the entire bar was aflame. Without batting an eye, the bartender, a gruff looking woman in her 50s, snuffed out the flames with a a wet rag. I mean, that shit was nonchalant! Like it had already happened five times that same evening (which, in truth, it may have). We had a good laugh and next thing you know, we woke up the next morning, the three of us scattered among living room furniture. Because when you end your night at Murphy's Law, you may just teleport home.

And I am looking forward to the No Reservations Boston episode.
Posted by eileen at 8:01 AM 1 comment: 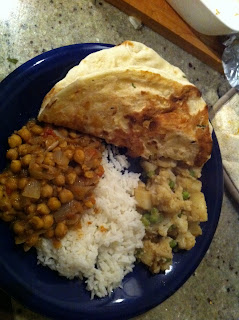 My new flatmate is a vegetarian, a fact that has led me to expand my vegetarian meal repertoire a bit...I mean, there's only so much meatless pasta and pizza one can stomach. I decided to give Indian cuisine a try- aside from Trader Joe's (sigh...), I've never made Indian food from scratch. I did some online searching and found a couple of recipes that looked tasty and relatively easy to make:

Then I bought some naan from the grocery store...so not entirely from scratch. The dishes were fairly simple to make and very tasty, although I did prefer the cauliflower one (add cauliflower to the list of veggies that are surprisingly good! See also: brussel sprouts) to the chick peas. Served with rice, the meal was certainly filling enough, although I may have to try my hand at samosas next time.
Posted by eileen at 7:09 AM 5 comments:

An old nemesis of mine, Edible Arrangements, has been thoroughly mocked in The Onion:

According to experts, the Connecticut-based franchise, which arranges skewered pieces of fruit into displays vaguely resembling floral bouquets, has defied all modern economic models, expanding continuously for the past decade despite its complete lack of any discernible consumer appeal.

I feel pleasantly vindicated. Thanks to Jeff for the link.

In totally unrelated news, an Australian sniffer dog was given a military award for bravery. Awwwww.
Posted by eileen at 7:09 AM 3 comments:

Are you ready for some pain(t)ball? 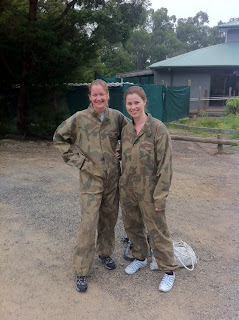 Yesterday I played paintball for the first time. One of my friends from work organized a lab outing (boss included!) to a paintball facility about an hour outside of the city. There were 14 of us total, so we were divided into two teams and everyone equipped with a camouflage jumpsuit, a face shield, a vest, a paintball gun, and ammunition (600 paintballs in total). We played a series of games, most of which were variants of hide-and-seek or capture the flag, on three separate courses- one had two large wooden forts, one was all natural woods and brush, and one had a bunch of barricades and barrels to hide behind. And onto the paintball...it was really fun and exciting and overall I had a blast but...it fucking hurt!! The very first time I got hit, I was hiding behind a log and poked my head up and BAM!, a paintball to the noggin, right above where my face shield ended. I felt a little bit woozy afterwards, but I recovered, and at least I knew what to expect from then on. I quickly realized that shooting wasn't my strong suit, so tried to make up for it by hiding and scampering, but based upon all of the welts and bruises on my ass, I wasn't so good at that either. I'd post a picture if it weren't so obscene. After the paintball ended, we had a barbecue and a good laugh about all of the funny stuff that happened during the action. Unfortunately, no one brought cameras out to the paintball pitch so I only have the before photo, not the after one of me covered in paint. Someone (JR!) said that paintball is dangerously close to World of Warcraft territory, but even though I had a great time, I don't think I could handle it more than once or twice a year, so I don't think I'm going to join the Victorian paintball militia or anything like that.
Posted by eileen at 4:49 AM 3 comments: 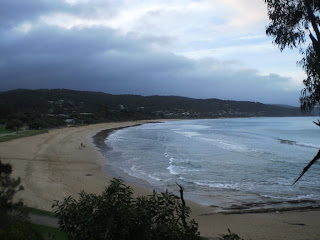 I recently attended the Australasian Society for Infectious Diseases annual meeting, which was held in Lorne, a beach town a couple hours from Melbourne, located right on the Great Ocean Road. I had been through the area once before, when I was on vacation before I moved here, and I can't believe I waited so long to go back- it's so beautiful and relaxing. The conference started out on a positive note- my lab is on a tight budget so I booked myself into one of the cheaper hotel options rather than staying at the resort where the conference was held, but I got upgraded to an "executive apartment" that had a jacuzzi and a patio with a great view. Holla! The conference itself was really good- it's nice to feel like I'm actually part of a field (as opposed to grad school where I was more or less a lone wolf in terms of research area)- all of the Australian researchers who work on pneumococcal pneumonia know each other and seem friendly and welcoming rather than competitive. This meeting was more geared towards clinicians and did have some pretty interesting talks mixed in, like the history of infection control in China and that sort of thing. And everyone seems to be in love with worldmapper.com, which resizes countries according to statistics relating to a certain subject, like pneumonia deaths or prisoners (holy crap, the US has the highest percentage of population in prison).

I was the only one from my lab who attended, but there were several people from my institute there, so I always had someone to chat with on breaks or join for dinner, which was a relief. Overall, the science, the scenery, and the socializing were all great, so I hope to go back to ASID next year!

stay tuned for more posts...paintball, cooking, etc...
Posted by eileen at 7:27 AM No comments: