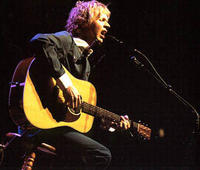 A couple of days ago my uncle asked me “What are you doing tomorrow night?” I love that question, because it normally precedes some sort of invitation or fun idea. It did again, as my uncle had an extra ticket to a Beck concert. I like Beck but haven’t seen him live since I was about 19 and heavily under the influence, and I love free stuff, so, of course, I accepted. The show was at the Harborlights pavilion, a big white tent on the waterfront that changes names every year- I think it’s currently the Bank of America Pavilion, and the sound was surprisingly good. I saw a guy I used to have a crush on but I didn’t go say hi because he looked like he was on a date and I was standing around by myself eating a hot dog like a big dork (Reason #46 Why I Don’t Have A Boyfriend: Frequent public consumption of hot dogs), but then I felt like a jerk later for not having said hello, because it seems kind of mean, seeing someone you know and deliberately not saying hi. Likewise, I try not to press the ignore button on my cell phone because I hate the idea of someone else looking at their phone, seeing my name, and making the conscious decision not to answer. It just seems so cold. Anyways, back to the concert… it was great. Beck played a lot of his most popular songs, including “Loser”, and mostly high energy stuff that kept the crowd on its feet. (Um, ever since I got back from Nicaragua, whenever I dance, I end up doing some sort of bizzaro meringue. Can’t stop meringueing. Has this happened to anyone else?) Late in the show, he switched gears and played an acoustic set, during which the whole band sat down at a folding table and chairs and started eating dinner on the stage. The stunt went from amusing to really cool when they began playing their dishes in rhythm, spoons banging on bowls, forks on plates, and one of them was even doing the finger around the water glass trick, making it go OooooooOOOoooooo like I did at every bar mitzvah I went to in middle school.
Posted by eileen at 2:27 PM